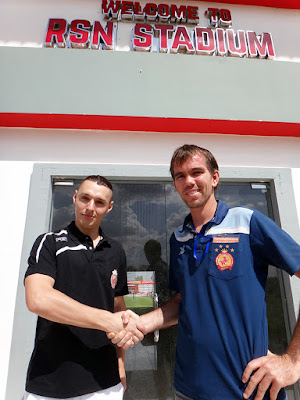 Ukrainian-born coach Oleg Starynskyi (30) arrived at RSN Stadium last week to help the club’s Academy set-up after spending the last 3 and a half years in Malaysia including the past six months as the assistant coach of the Malaysian U-17 national team. Oleg was born in Bila Tserkva, near the Ukraine capital of Kiev, and played youth football for FC Arsenal-Kyiv before spending five years learning the art of film directing at the Kyiv International University. That’s where he began coaching and worked for the Kyiv regional federation and as a youth coach with FC Arsenal-Kyiv, before taking up a coaching post with the Goal Academy in Malaysia for three years. He’s a UEFA B-license coach, with a Coerver coaching diploma. Oleg is pictured above with GM Sam Schweingruber.
Harry Varley’s has coached his final session with the PPCFC Academy U-15/U-17s. After six months with Crown as Academy Technical Coordinator, as well as overseeing the Football School and our community engagement program, British-born Harry is heading to Grenada in the Caribbean to take on the role as their head of football. He will be in charge for the CONCACAF U-17s Women’s Championship and the men’s Caribbean Cup squad next month. Thanks to Harry for his hard work during his time with the club and we wish him much success in the future with the Spice Boyz.
Posted by Andy Brouwer at 11:44 AM No comments: 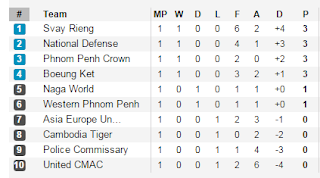 Off to a flying start

Friday 19 February 2016 : Phnom Penh Crown 3 Cambodian Tiger 1 (Metfone C-League).Crown came out on top in an exciting season's opener at RSN Stadium tonight. The visitors began brightly  with Suong Virak skating around home keeper Keo Soksela but he planted his shot into the side netting. Soon after Om Thavrak rose highest to head a corner inches over the bar and Mura Tomoki sent a left-foot shot skidding wide. However, a careless foul by Or Sophoan in the back of George Kelechi gave Shane Booysen the opportunity to put his team ahead on 17 minutes with a well-aimed free-kick from 20 yards. Hem Simay in the Tiger goal pulled off a great 1-handed stop to deny Booysen and then saved from Kelechi's header before Keo Sokngon poked the rebound against the upright. Sokngon saw his header from In Sodavid's volleyed cross rebound off the other post, Simay saved another attempt at point blank range from Crown's No 9 and Sodavid was inches away before Keo Soksela stopped a fierce drive by Sadakuni Tomoyuki just before the interval. An action-packed first-half, with a booking for Seut Baraing on his 1st-team debut on 25 minutes.Moments after Orn Chanpolin blasted wide with a clear sight on goal ten minutes after the break, it was Booysen who doubled his side's lead when he coolly side-footed in from Sokngon's pass on 56 minutes. New boys Anthony Aymard and Kelechi were both involved in the build-up, while Tiger claimed Thavrak had been fouled by the goalscorer but their protests fell on deaf ears. That signalled the introduction of Tiger's player-coach Kihara Masakazu and he pepped his team up, reducing the deficit with a powerful drive on 72 minutes from Tomoki's pull-back. The home fans continued to cheer their team on and their efforts were rewarded with a third and decisive goal on 83 minutes. Baraing and Booysen worked a short corner routine and the South African's low drive took a deflection off Men Seyha's boot to nestle in the back of the net. Effectively game over though Soksela had to pull off a smart stop from Taing Sopheak, and Sodavid raced clear but finished weakly. Three points for the champions from their first match of their defence of their title.
PPCFC v C/Tiger: Soksela, Makara, Baraing, Aymard, Boris, Chanpolin, Pissa (Thierry N 88), Sokngon (Tola 71), Sodavid, Booysen, Kelechi. Subs (not used): Chanvuthy, Sothy, Boran, Yaneat, Charly, Noeut, Sakrovy, Senteang. Booking: Baraing. Goals: Booysen 3 (17, 56, 83). Attendance: 2,774.
Crown  head coach Oriol Mohedano gave his brief thoughts after the final whistle, a 3-1 success in his first Metfone C-League game in charge of the team: "In the beginning, we can see lots of passion and fighting but not too much thought as our opponents started well. Then we had the free-kick that changed the score and our confidence grew, step by step, and we started doing what we've been working on in training. Good signs and it went to plan. After going 2-nil ahead, our opponents made it difficult for us but it was a logical victory, against a good team. I must say that Shane (Booysen) arrived on time for us, he hasn't played much in training for us and we hope he's now recovered from his injury. He's very important to our team."
Hat-trick hero Shane Booysen spoke about his game and his goals in the 3-1 win. "I was confident but I'd had no training or pre-season games because of my injury, so I was prepared to come on as a substitute. I'd been away on holiday, so this was my first start and I was nervous, even though I'm an experienced player. When we got the free-kick, I thought it would boost my confidence so I took it. I scored and it really boosted my morale. The first game is really important to set the foundation for the rest of the season. I thought our players fought together as a team, we know each other very well and our combination play was very good.For the first 15 minutes I was tired, breathing-wise, though legs-wise I was okay. When I got my second breath, it was fine but my match fitness wasn't there at the start. In the second-half our team's confidence grew, we supported each other, we followed the coach's instructions and I could score the goals because of the support of my teammates. Our young players and their extra energy and fresh minds really helps the team.For free-kicks, it's usually Thierry or me. I took responsibility for this first set piece, though last season I didn't score from a direct free-kick. I saw the goalkeeper and the wall set up for the ball to go one way, so I put it in the other corner. I got the speed and the right angle, it went past the wall and we went ahead. For the second goal, I went for the ball (with Thavrak), it was a 50-50 ball and he slipped in front of me, I stood up and we counter-attacked. I never saw it as a foul, neither of us touched the ball. Sokngon passed the ball, I took it off the defenders toe and the keeper went one way, so I put it the other way. For my third goal, we practiced the move in training the day before, and our training ground routines worked well in the game. I thought if I kick it hard enough, on target, it might go in and it did, with a deflection. I was very happy it went in."
Posted by Andy Brouwer at 12:59 AM No comments: