Friday 11 March 2016: Phnom Penh Crown 2 Cambodian Tiger 0 (Friendly).Two goals either side of the half-time break killed off Tiger at Western Stadium in this afternoon’s friendly match. South Korean trialist Lee Joo-Yong went close with two shots from outside the box in the opening 18 minutes before Svang Samnang came to the rescue with a block as Tiger broke through. In Sodavid’s blast was punched away by Hem Simay, before Chhom Pisa skewed a header wide and with 3 minutes of the 1st-half left, Crown took the lead. A foul on Pisa gave Seut Baraing a sight of goal from 20 yards and his up-and-over curling free-kick found the bottom corner inside the near post. It was Baraing again, just two minutes after the interval, with another free-kick that saw Kok Boris put pressure on Simay and Ouk Sothy found himself with a simple header into an unguarded net for 2-nil. Sothy was inches away from a second headed goal, while Keo Soksela came out smartly to block Suong Virak’s attempted chip. Ouk Serey Ratanak and Chhuot Senteang looked lively up front for Crown, who had attempts from Baraing and Mat Sakrovy stopped by the Tiger keeper, as the visitors claimed a deserved victory.

Saturday 12 March 2016: Phnom Penh Crown Academy 5 CMAC Utd 1 (Friendly).The Crown Academy continued their winning form with a comprehensive 5-1 win over a CMAC United XI at RSN Stadium Saturday morning. Nop David and Men Piphop put the mixed U-16/U-18 Academy team two goals ahead in the opening 20 minutes, with CMAC’s Aaron Sexton grabbing a goal on the half-hour. The introduction of Ouk Sovann and Mat Sakrovy at half-time strengthened the Academy attack with Sovann supplying Sakrovy for Crown’s third on 63 minutes. In time added-on, Sovann again turned provider for another Sakrovy goal, before Sovann scored a fine individual goal himself in the final seconds.
Posted by Andy Brouwer at 11:49 AM 1 comment: 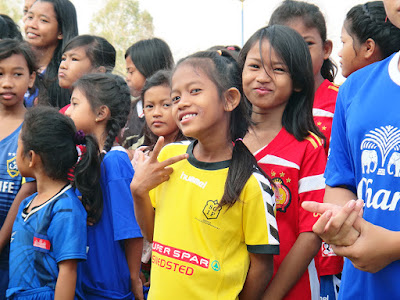 Phnom Penh Crown hosted a very successful International Women’s Day fun football festival under the banner of Girl Power! this morning at RSN Stadium. The Crown 1st-team squad and younger Academy boys took part as team captains and cheerleaders, to support and encourage the young girls that came from all over the city to join in. After a series of friendly matches and fun games, the final was decided on penalty kicks (with Thierry and Boris’ team taking 1st place), with prizes for the winning team and runners-up. Thanks to all the girls from COLT and other organisations, as well as our players and staff who joined in to make this a memorable morning promoting girls in sport at RSN. At Crown we encourage participation by women in everything we do, whether it is coaching, community football and our own Ladies football team. We truly believe football is for everyone.
Posted by Andy Brouwer at 11:47 AM No comments:

Saturday 5 March 2016: Phnom Penh Crown 1 Nagaworld 2 (Metfone C-League Week 3):Crown were caught cold from the start and conceded after just 24 seconds of the game when Kouch Sokumpheak flicked in a right-wing center from Privat Mbarga and the ball bobbled through the legs of Keo Soksela in the Crown goal. In response, Neou Thierry headed over and Long Boran’s far post nod was stopped on the goal-line. Soksela came out quickly to halt Rasheed Omokafe’s run and chip and later in the first-half he did the same to Mbarga, before a one-handed low save to deny Park Yong-Jun. Crown’s best effort came courtesy of a 25-yard In Sodavid free-kick that was smothered at the foot of the upright by Yok Ary.After the break, Sodavid’s run and shot and Seut Baraing’s deflected drive failed to trouble Naga’s keeper before the home side extended their lead on 65 minutes. Sun Sovanrithy’s deep left-wing cross was headed in unopposed at the far post by Mbarga to give Crown a mountain to climb. Ouk Sothy and Leng Makara sent efforts wide before Sean Pissa joined the action and within 40 seconds he’d reduced the deficit with a glorious curling strike into the roof of the net from just inside the penalty area. The goal came with 10 minutes remaining but Crown couldn’t make their pressure count and their last chance went astray when a Chhom Pisa drive from the edge of the area sailed over the top. It was Crown’s first defeat of the new season in week 3. PPCFC vs Naga: Soksela, Baraing, Titchhy (C Pisa 46), Aymard, Boris, Chanpolin, N Thierry (S Pissa 79), Kelechi, Boran (Sothy 66), Makara, Sodavid. Subs not used:  S Samnang, Yaneat, Senteang, Tola. Goal: Pissa (80). Referee: Chi Samedi.
Sunday 6 March 2016: Phnom Penh Crown Academy 1 FFC National Academy 0 (Friendly).It was back to winning ways for the Crown Academy mixed team against the FFC Academy at Olympic Stadium this morning. In this 105-minute match of four periods, Crown dominated the first two periods and efforts from Yeu Muslim and Sin Kakada struck the woodwork, while Pov Ponvuthy, Sath Rozak and Mit Samel also went close to breaking the deadlock. FFC pressed in the third period and keeper Svang Samnang showed his class with two brave saves. On 97 minutes Men Piphop created space for himself in the opposition penalty area, taking a Ponvuthy pass in his stride, and rifled the ball home for the only goal of the game, to take Crown’s record to 11 wins in 12 matches against the FFC Academy. It was the first game under new coach Oleg Starynskyi.
Posted by Andy Brouwer at 11:44 AM No comments: 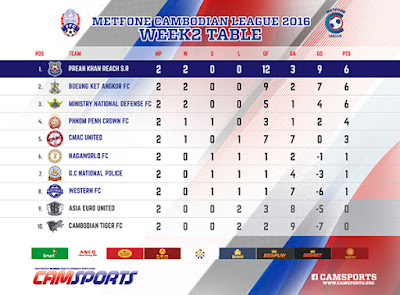 Friday 26 February 2016 : Phnom Penh Crown 0 National Police 0 (Metfone C-League Week 2).Crown will see this as two points dropped, after they failed to make their domination of the match count in front of goal. The game started in the worse possible fashion with dangerman Shane Booysen hobbling off after just a minute with a twisted knee, with Long Boran replacing him and Seut Baraing moving into midfield. Baraing tried his luck with a thirty-yard free-kick that goalkeeper Prak Pherun grabbed at the second attempt. A poor pass by Keo Soksela presented Nuth Sinoun with a glorious opportunity inside the Crown penalty box but his weak shot was cleared by Anthony Aymard. Tith Dina’s free-kick found Adekunjo Busayo in space but his header was straight at Soksela. With few clear chances in the first-half, both goalkeepers had to deal with long range efforts with Pherun diving full length to push aside a George Kelechi effort, and Soksela tipping over a Noun Borey drive from wide on the left. Orn Chanpolin’s effort on the break was deflected wide by Sinoun and In Sodavid’s ball behind the Police defence was missed completely by Keo Sokngon in the six-yard box.  In the last minute, another Sodavid  cross was dropped by Pherun but Sokngon’s attempted lob was way off target, and with the final kick, Borey sent a long range effort over the cross-bar.Kelechi glanced a header inches wide from Sean Pissa’s cross just after the break, Soksela was in the right place to punch away a Sinoun free-kick and then he collected a Oh Ju-Ho shot through a crowd of players. A 30-yard attempt by Boran cleared the bar, Sokngon will feel he should’ve done better when he got on the end of a Leng Makara cross, Kelechi blasted across the face of goal and Seut Baraing’s 20-yard drilled right-foot drive was tipped over by Pherun. Just before the end, Sokngon headed wide at the far post from Kelechi’s pass, he then shot weakly at Pherun from another Kelechi feed and then supplied Sodavid, but he curled his drive over. In the seventh minute of time added on, Baraing sent a free-kick two yards over the top as the game ended goal-less, with disappointment etched on the faces of the Crown players and staff.
Head coach Oriol Mohedano gave his views at the end of the game. “Not a happy day for us. We expected more from the game. We should’ve done better in the first half, but we didn’t attack well. Respect to our opponents in the first half who surprised us with their intensity. The sensations after such a match; we are disappointed, the result it’s not enough for us. We pushed for the win, but it never came.” PPCFC v Nat Police: Soksela, Makara, Baraing, Aymard, Boris, Chanpolin, Pissa (Sothy 70), Sokngon, Sodavid, Booysen (Boran 6), Kelechi. Subs (not used): S Samnang, Thierry N, Titchhy, Senteang, Tola. Booking: Sothy.
Posted by Andy Brouwer at 11:36 AM No comments: