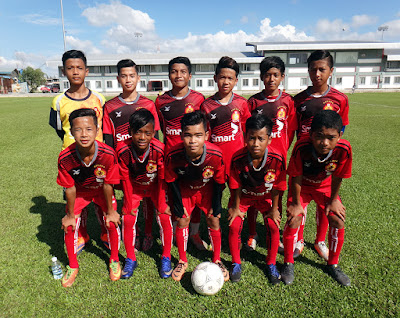 Result: PPCFC Academy U-15 8 FFPCA 0 (RSN Youth Cup Elite U-16). It was business as usual for the Academy today at RSN after their shock defeat last weekend in the new RSN Youth Cup. In their first game under Thai coach Somchart Yimsiri, the youngsters led 3-0 at the break with goals from Sem Phanny and two from Ros Darapich. Two goals each from Chon Chamroeun and Met Samel after the interval increased the lead with Pros Vutha's goal completing a dominant performance late on.
PPCFC Academy line-up, back row, LtoR: Laiheang, Chamroeun, Samel, Pisoth, Navin, Darapich. Front row: Vutha, Phanny, Sokly, Ladin, David.
Posted by Andy Brouwer at 6:36 PM No comments: 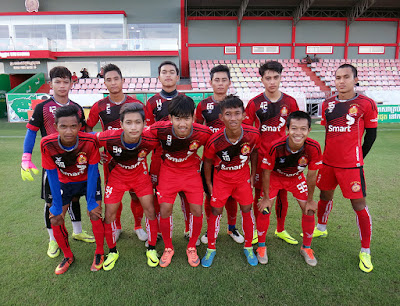 Match Report: PPCFC 10 Football Future Pro 3 (Pre-Season Friendly).
In this afternoon's friendly at RSN Stadium, a Crown team made up of players who didn't play in last night's friendly with Western, put FFP to the sword after a sluggish start. The 2nd-half was brightened considerably by the first appearance of Shane Booysen since his ACL injury in February. FFP got the ball rolling with the first goal, through Privat on 10 minutes. Four minutes later Sin Kakada curled in the equaliser from a 20-yard free-kick. Within a minute FFP went further ahead and on 18 minutes Pov Ponvuthy made it 2-2, heading in Sraing Titchhy's cross. On 35 minutes, Thai striker Somkiat Kunmee netted his second goal in three minutes, with deadly accuracy, and Mat Sakrovy rifled in a far post volley from Yeu Muslim's cross, a minute before the break.
With the addition of Booysen at the interval, Crown continued to take the game to FFP and the South African signalled his return with a curling free-kick into the top corner from 18 yards, eight minutes into the half. A minute later he moved effortlessly onto Kakada's pass and sent a first-time chip over the stranded goalkeeper for his second. Next he turned provider with a perfect pass for Somkiat to run through and lob the keeper on 64 minutes, for his hat-trick goal. With 71 minutes on the clock, Somkiat turned neatly in the box and set up Kakada for his second goal and a minute later, Sakrovy's bye-line center was turned into his own goal by a defender for Crown's tenth. Baldwin scored a consolation for FFP but Crown failed to convert another half-dozen chances through Booysen and Somkiat before the final whistle.
PPCFC line-up, back row, LtoR: Chanvuthy, Boris, Chanchav, Titchhy, Sakrovy, Sovann. Front: Kakada, Muslim, Somkiat, Piphop, Ponvuthy.

Shane Booysen made his eagerly-awaited return to competitive football for the second-half of today's practice game with FFPCA. And he crowned his return with two goals in the first nine minutes of stepping back onto the pitch in a 10-3 victory. His last game was in February before his ACL operation. How did he feel? "Playing 45 minutes after such a long time was breathtaking, quite literally. I never thought that coming back so soon would be so hard, but I had a good time and enjoyed myself. My touches were a bit rusty but with more match fitness I will get there. Overall experience was really nice and playing with my new teammates and the younger guys made my job a bit easier as they ran more. Let's see and hope that my match fitness will return and our team will pick up their performance. There was a touch of rustiness and I was not clinical enough. One ball I approached it thinking it was a goal already but it shows you are never bigger than the game, so its something I need to work on to be back to where I was." From all PPCFC and football fans, welcome back Shane.
Posted by Andy Brouwer at 8:38 PM No comments:

No goals at Western 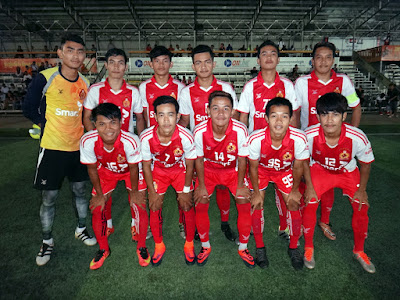 Match Report: PPCFC 0 Western 0 (Pre-Season Friendly).In tonight's friendly under floodlights at Western, it was Crown that started on the front foot when Mao Piseth robbed a defender but sent his flicked shot just wide of the upright. Pov Ponvuthy had a couple of chances that he could've done better with while the home team's Osa crashed a free-kick against the cross-bar and then rolled a shot against the foot of the post. Keo Soksela tipped a free-kick over the bar on the restart before Western's keeper made a double save from Seut Baraing's free-kick and Kok Boris' follow-up shot. Thi Va impressed in his first game but his shot was easily held. Kim Namgun's run to the bye-line gave Boris another chance but his shot was deflected wide, and then he headed over from another Baraing free-kick, as the game ended scoreless.
PPCFC line-up, back row, LtoR: Soksela, Va, Safy, Pissa, Chanchav, Pisa (capt). Front: Baraing, Noeut, Piseth, Ponvuthy, Rozak.
Posted by Andy Brouwer at 9:40 PM No comments:

PPCFC continue to assess their options for new players as the 2017 season looms a couple of months away. The MCL is expected to begin in February, though ratification by the Federation is still awaited, while Crown will be going to China in two weeks time for a tournament and also have the AFC Cup on the horizon, also expected to happen in February. With new head coach Oleg Starynskyi currently in his home country of Ukraine, first-team coaching duties are in the hands of goalkeeping coach Dave Maguire and he has seen two more new faces among his charges this week. South Korean midfielder Kim Namgun, fresh from a season with Korean National League side Gangneung City, but with experience in Brazil, China and Montenegro, is training with the team, as is young Khmer striker Thhe Va, who was with Thai team Trat last season. Tomorrow (Friday) the Crown team will face Western, at the Western Stadium, with a 6pm kick-off under floodlights in the latest pre-season friendly. Unlikely to feature are the injured trio of Anthony Aymard, Orn Chanpolin and Keo Sokngon, whilst Shane Booysen gets closer to joining in the competitive action every day.
Posted by Andy Brouwer at 2:31 PM No comments:

Thanks for the memories

Two of PPCFC’s longest-serving players have recently parted company with the club. Bin Thierry, who joined the club in October 2012, and Leng Makara, who arrived at RSN in December 2011. Both players were an important part of our Championship-winning teams in 2014 and 2015 and both went onto deservedly represent the Cambodia national team during their time at the club. We would like to record our thanks and appreciation to both players for their service to PPCFC and wish them continued personal success in the future. 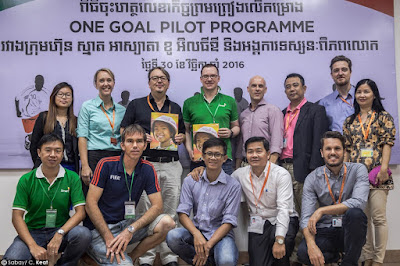 PPCFC and SALT Academy officially joined forces with NGO World Vision and sponsors Smart to kick-start the One Goal Pilot Programme, at a media conference yesterday (pictured above). The project fits into Smart's mandate to support education, environment and community sports and will allow World Vision to make a positive impact on youngsters in three provinces over the next year: Preah Vihear, Battambang and Takeo. One Goal will focus on children in those provinces receiving life skills and football coaching from coaches trained by PPCFC and SALT, who provide the technical expertise. Youngsters will train and play regular matches and enjoy a tournament at PPCFC later next year. Sam Schweingruber was at the official signing yesterday and has already started coaching the World Vision coaches to make this project a success.
Posted by Andy Brouwer at 2:20 PM No comments: