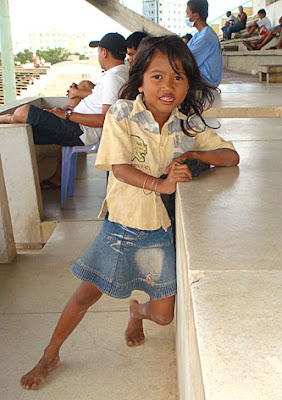 Plastic water bottle collector Lina
We were treated to 10 goals in two Metfone C-League games this afternoon at Olympic Stadium. Considering we weren't watching any of the teams challenging at the top, that was a fair price to pay for sitting in the heat and humidity in my book. In the 1st game, National Police beat Kirivong 3-2 with the winner coming in time added on at the end. In the 2nd game, Prek Pra Keila's vociferous fans were treated to another win by their team, their 2nd in two weeks, with a 3-2 win over Chhlam Samuth. I think that calls for another party amongst their strong Muslim support. They certainly made enough noise in the stadium today.
The stadium is rife with rubbish collectors during the matches and you only have to turn your back for a second and the cheeky ones will take your bottled water or anything else you leave out in the open. However, I have a soft spot for this young one who makes about half a dozen trips to my seat during the games in the hope of getting my empty plastic water bottles. She announces herself by throwing her bag over the wall in front of my seat and beaming her winning smile from ear to ear. I asked her name today and I think she said Lina as she scampered away with my empty bottles. More later after I've eaten my curry. I'm starving.
Posted by Andy Brouwer at 7:10 PM