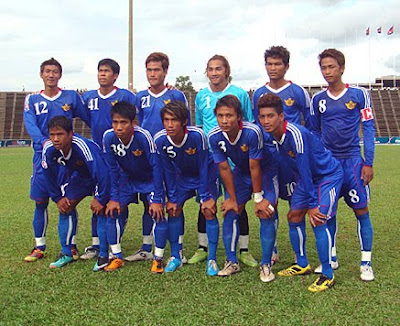 The Army now sit at the top of the C-League table after their 3-1 win over PKR
In this afternoon's football extravaganza (tongue firmly in cheek) at Olympic Stadium, the 2nd of the Metfone C-League games was a real tasty affair with 3rd (Preah Khan Reach) meeting 4th (the Army). And it was the Army who came out on top to put a dent in PKR's title hopes and to go to the top of the league table themselves, leapfrogging over Phnom Penh Crown by a point, though Crown have two games in hand. The game itself was one of the better ones seen so far this term with Preah Khan playing more of the football, but the Army were up for the game and in the faces of PKR, which put the Military Police-team off their stride. Khuon Laboravy and Prak Mony Udom should've perhaps done better with the four chances they had between them before and after Army took an 8th minute surprise lead. A ball from the right found Phuong Soksana in space at the far post and he rifled in the opportunity from six yards out to put the Army's noses in front. With PKR mis-firing at one end, it was left to Phlong Chanthou to show them how it's done when he lifted a boot to loop the ball over the head of Ouk Mic in the PKR goal, after their defence failed to handle a Pheak Rady free-kick. 38 minutes on the clock and the Army were buoyant. They began the 2nd half in a similar vein, looking hungry with PKR appearing a little shell-shocked. Chin Chhoeurn was playing out of his skin, ably supported by a masterclass midfield performance by Oum Kumpheak, and it was the nippy winger Chhoeurn who put the Army into raptures with a 3rd goal on 58 minutes. Kun Kuon put the ball into space, Chhoeurn used his speed to race onto it and buried his shot past Ouk Mic with some ease. On 70 minutes PKR were handed a lifeline by the referee. He saw Khek Khemarin's byeline challenge on Phany Y Ratha as a foul and pointed to the penalty spot. Army were incensed but Laboravy waited for the commotion to die down before rifling home his spot-kick. Sou Yaty, looking every inch the best keeper in the country, came to Army's rescue with ten minutes remaining, when he saved Ratha's powerful drive and grabbed it at the second attempt as the striker shaped to score. Laboravy was also denied and in the final moments Ke Vannak missed an open goal at the other end when Ouk Mic flapped at a Rady free-kick. Army go to the top of the table with this 3-1 win and Preah Khan are left to rue what might have been. Preah Khan Reach lost to their old adversaries, the Army, 3-1 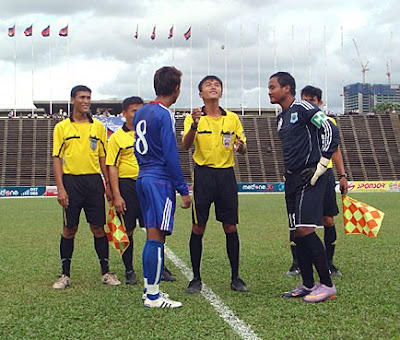 Referee Neang Sorithya admires his own coin-tossing prowess before the game
Posted by Andy Brouwer at 7:55 PM

Mr Brouwer, you keep saying that Sou Yaty is the best keeper in the country but I think Ouk Mic is the best that we have. He is the national team captain and in the match against Malaysia, he showed it all. He was supreme under pressure especially the under the high ball and the two saves he made were match saver. Sou Yaty will be one of the better if not the best around in time to come but for the time being, Mic is number one in my opinion.

you can call me Andy if you wish.
I disagree. Sou Yaty has youth on his side as well as agility, shot-stopping ability, can take high crosses and is brave. He should've been the regular keeper once Samreth Seiha retired, but Ouk Mic was given the job. Mic is a very competent keeper but he doesn't have the talent that Yaty has, especially with high balls into the box and when he's diving at the feet of forwards. I don't like goalkeeper's being captain either. So for my money, Yaty should be the no 1, but of course, he doesn't play for Preah Khan Reach does he....
I was told that the national coach had no idea who Yaty was at the start of this season but he has been forced to include him by a string of excellent performances. He even chose the Army no 2 keeper over Yaty initially. Unbelievable. So I don't actually expect the coach to pick Yaty instead of Mic anytime soon.
Andy

As for Mic against Malaysia. He made an excellent stop at the very end of the game, low down by his post. That was almost as much the match winner as Sokumpheak's goal. He also made a stop at the end of the 1st half but that was accidental. He played well against Malaysia but they were a very disappointing outfit (a shadow of their SEA Games team) and I would still play Yaty in front of Mic every time. Mic has had his day in the spotlight, now he should move over and let the younger, and better, man take over.
Andy