BBU pull it off 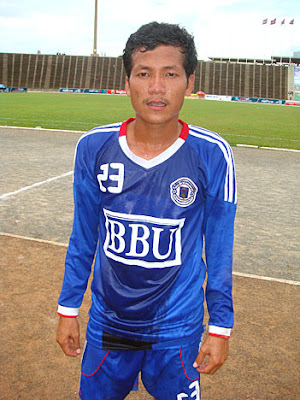 Matchwinner Ny Chinan of BBU
I'm sure you are waiting patiently for the results from today's feast of football at the Olympic Stadium. The Metfone C-League matches on view pitted BBU against Rithysen in the early start. And for a while it looked as though Rithysen, propping up the rest of the league with just two points from eight games, might get something out of this game. They didn't and BBU deservedly won, though the 2-1 scoreline doesn't really do their domination sufficient justice. Rithysen, bolstered by three foreigners, whilst BBU play without, took the lead against the run of play on 28 minutes. Rim Bunhieng hesitated in his own penalty area, Mat Rofazy took the ball off his toe and steered his shot into the gaping goal. BBU pressed but had to wait until four minutes before the break to draw level. El Mostafa clumsily took the legs of Pech Sina on the edge of the box and referee Khuon Virak raced to point to the spot. The wind moved the ball off the spot twice before Oum Chandara could roll his penalty wide of Oum Veasna for the leveller. A rash of bookings at the start of the second half and referee Virak had no choice but to brandish a red card when he booked BBU's Nhim Sovannara a second time, after an off the ball incident. The BBU camp were furious with the decision and it took Sovannara two minutes to slowly leave the field. On 79 minutes, Rithysen had their 2nd chance of the game when Etim Esin robbed Chhun Sothearath and rounded Hem Simay in the BBU goal, only to lash his shot into the side netting. It was the last we saw of Rithysen. Two minutes later, Chan Veasna sent over a hopeful cross and sub Ny Chinan ghosted in from nowhere to head powerfully in at the far post. 2-1 to BBU and they should've added a few more in the closing moments. Chinan missed two more, one an absolute sitter from five yards out and Sothearath had a 25-yard thumper tipped wide by Veasna. Rithysen were deflated at the end of the match after holding the students for all but ten minutes of the game. 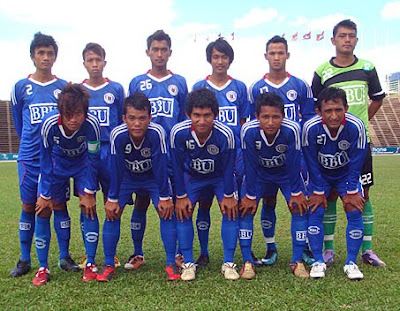 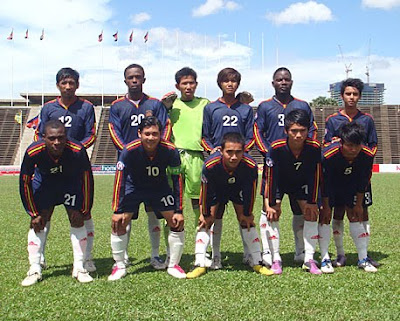 Rithysen were game but lost out with ten minutes to go
Posted by Andy Brouwer at 7:37 PM