Sokumpheak wins it for Crown 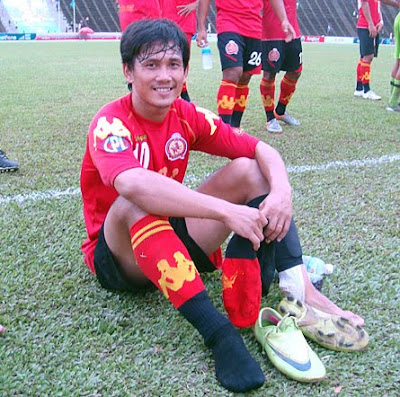 Crown's matchwinner, Kouch Sokumpheak, rests his weary bones
I had a music gig last night so I had to wait until this morning to give my views on Phnom Penh Crown's victory over the Army yesterday. Not pretty, certainly not a game to go down in the annals of history as a classic, but eventually effective after changing the formation and getting the result, 1-0, that Crown's offensive intent deserved. And yet another clean sheet, their fifth in 7 league games. After the match, Crown's caretaker coach Bouy Dary declared himself satisfied with the result, but not with the performance. "I tried a 4-4-3 formation in the first half but there was not enough movement or support, so I changed it to 4-4-2 in the second half and we played much better. I also made some changes amongst the players as I wanted to use my fast wingers and the result was we played better and we got the result we wanted." Crown now have an 11-day break (except the national team players who play a meaningless friendly on Tuesday) until they travel to Singapore to play SAFFC in the RHB Singapore Cup on 16 June.

With their concentration distracted by the midweek departure of head coach Bojan Hodak to China, Crown needed to focus on the job in hand and needed a win to leapfrog back over Naga Corp into the top spot in the Metfone C-League table. And Army are no pushovers, sitting in 3rd place. Caretaker Dary rested Chan Dara and Kenny Nwafor and brought back the three players suspended for the Kirivong clash last week, and included Sun Sovannrithy at right-back. As Bouy Dary indicated, Crown will not be happy with their first-half performance. They failed to pose enough goal threat during the opening period and creativity was at a premium. The Army had to replace their goalkeeper after 20 minutes when Oum Vichet's brave dive at the feet of Odion Obadin left him with a cut hand. Sou Yaty took over. Six minutes from the break, Yaty was well-placed to collect a powerful 25-yard shot from San Narith but that was about the sum of Crown's offensive intent as the first-half petered out. In the final moments of the half though, the Army looked to have taken the lead. A point blank header by Oum Kumpheak from a corner looked destined for the net until Crown keeper Peng Bunchhay reacted with lightning reflexes to fingertip the ball over the crossbar. Bunchhay has been in excellent form in recent weeks, which makes his absence from the national team squad even more puzzling.

Crown began the second-half in a much more determined mood and took the game to the Army, camping in their half for most of the next 45 minutes. A free-kick from Sun Sopanha sailed just over the cross-bar, as did another 25-yard effort from San Narith. Kouch Sokumpheak combined well with Chan Chaya but the latter ballooned his drive well over from the edge of the area. Changes to their formation and personnel began to bring Crown some success on the flanks and one of the substitutes, Suong Virak, poked his shot wide as he was challenged by Sou Yaty, after Sokumheak put him in. The winning goal finally arrived with eight minutes remaining on the clock. Chan Chaya rode his luck on one of his signature mazy runs, got a fortunate break off an Army defender and laid the ball into the path of Kouch Sokumpheak, who picked his spot from six yards out. It was no more than Crown deserved but it had taken its time in coming. That was it as far as goalmouth action was concerned, Crown collected the three points without ever reaching top gear and return to the top of the C-League table. A booking for Hong Ratana will see him miss the next league game against Naga Corp on Monday 20 June - a mouth-watering prospect for all football fans, coming just 4 days after Crown's Singapore Cup match.
Crown line-up: Bunchhay, Sovannrithy, Sothearith (Dara 72), Tiny, Obadin, Narong (Ratana 65), Narith, Sopanha, Chaya, Sokumpheak, Njoku (Virak 55). Subs not used: Visokra, Vanthan, Nwafor, Sophanal, Sophat, Sochivorn, H Pheng, S Pheng. Bookings: Sovannrithy, Ratana. 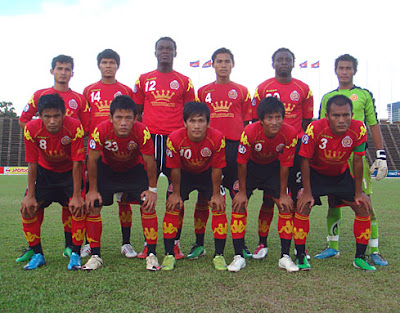 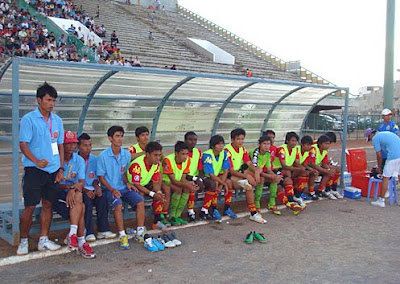 The Phnom Penh Crown bench just before the start. Caretaker coach Bouy Dary is on the far left. 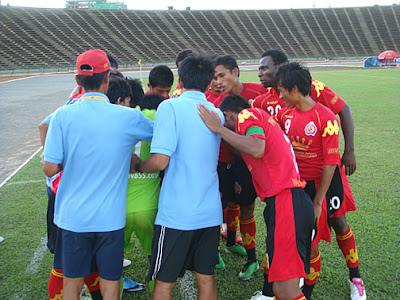 The Crown huddle before the game begins 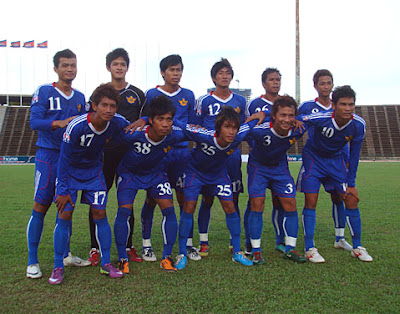 The Army team line-up for a pre-match photo 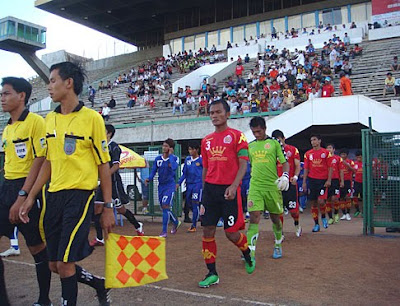 Thul Sothearith leads out the Crown team in red & black 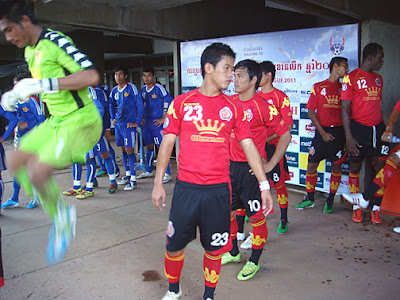 Everyone tries to ignore Peng Bunchhay's tunnel jumps
Posted by Andy Brouwer at 10:00 AM