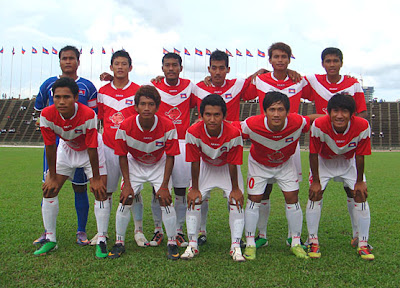 The Cambodia starting XI: Back Row, LtoR: Mic, Sopanha, El Nasa, Raksmey, Laboravy, Rithy. Front Row: Tiny, Chhoeurn, Sothearath, Sokumpheak, Rady
All Cambodian international victories should be savoured when they come along, as they are pretty much a rarity under the current South Korean coach Lee Tae-Hoon. And they don't come any easier than the one the Cambodian national team managed against the Malaysian Olympic team this afternoon. To say that the visitors were a pale shadow of the Malaysian team that won the SEA Games two years ago and the Suzuki Cup last year is a massive understatement. This team couldn't lick their boots. Add to that a performance of some magnitude by Kouch Sokumpheak for the 80 minutes he was on the pitch and two saves by Ouk Mic that kept his team in the game, and you have the 1-0 success Cambodia recorded today in a nutshell. Forget the last 20 minutes which was a joke as the heavy rain throughout the 2nd half left the pitch under water and the players simply incapable of playing anything resembling football. There were other performances of some note, namely central defenders Sok Rithy and Tieng Tiny, until the latter blemished his copybook with a red card borne of pure stupidity, and the central midfield pairing of Chhun Sothearath and Sun Sopanha did well enough as a duo. There were some less memorable performances by Khuon Laboravy, Sam El Nasa and Chin Chhoeurn but against such poor opposition, their teammates could afford to carry them. The winning coach made half a dozen changes in the second half but how much he can take away from the game is up for debate. For the first hour, Cambodia fielded players who are essentially senior team regulars, only giving a run out to some of the newer squad members late in the game and in conditions more akin to water polo than football. All that said, a win is a win, you can only beat the team put in front of you and Malaysia will field most of their squad in the SEA Games later this year. Though it was the full Cambodian national team rather than an U-23 line-up, as a fillip ahead of the World Cup matches against Laos, it might just work, both with the team, who looked well pleased with themselves, and the fans in the stand, who were cock-a-hoop to see their team win.

The first action of any note saw Cambodia take a tenth minute lead. Laboravy fed Kouch Sokumpheak wide on the left, a pass which he controlled neatly on his thigh, shimmied his way inside the box, ghosted past two defenders and fired a low strike under the body of keeper Khairul Fahmi Che Mat. It was a gifted moment for the Phnom Penh Crown striker who is widely regarded as the country's best homegrown talent and this will only enhance that reputation. Both teams were passing their way around the pitch and a touch from Sam El Nasa put Sokumpheak inside the box once more, he left the full-back in his wake but his attempted chip-cross was blocked by Che Mat. At the other end, Sok Rithy's last-gasp saving tackle robbed Izzaq Ramlan of a good opportunity on goal. A 20-yard fizzing drive by Chhun Sothearath was held by Che Mat, though with the last kick of the first half, Cambodia's keeper-skipper Ouk Mic saved his team without knowing much about it. Zack Haikal Nor's neat cross behind the home defence looked to have found Fadhli Shas in space but his goal-bound touch hit Mic, more by luck than judgement, and referee Thong Chankethya blew for the break.

To preserve their lead, Sokumpheak was withdrawn into midfield at the start of the second half but within ten minutes Sam El Nasa was replaced and the Crown striker restored to the attack. In fact he was also making tackles in his own box and really played a mammoth game for his country today. Just after the hour Chin Chhoeurn got his head to a Pheak Rady long ball but the effort cleared the bar as both sides tried hard to press but without much success. The two team coaches began a series of substitutions, eleven in total, as the heavy rains came down, covering the surface in water and making conditions unplayable. A touch of red mist ten minutes from the end saw Tieng Tiny issued with a straight red card for a blatant push in the back of Abdul Jusoh, after the midfielder had stuck a knee in Tiny's back. No excuses, it was a stupid reaction from Tiny. The rain continued, the substitutions likewise, Cambodia were holding onto their lead but it needed a really sharp save at the foot of the post by Ouk Mic from Muslim Ahmad with three minutes to go to preserve that lead, which saw out five minutes of added on time before the whistle blew and celebrations could begin. Albeit very wet ones.
Cambodia line-up: Mic, Rady, Raksmey, Tiny, Rithy, Sopanha (Vichheka 83), Sothearath, Chhoeurn (Saray 80), Laboravy (Souhana 70 [Narong 89]), El Nasa (Mony Udom 57), Sokumpheak (Hasan 80). Subs not used: Yaty, Pancharong, Nasiet, Piseth, Oudom, Veasna, Soksana, Dina. Bookings: Sopanha, Rithy, Tiny (red card). 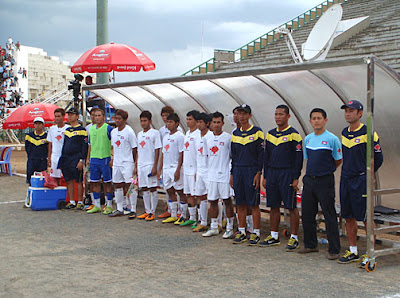 The Cambodian bench stand for the national anthem 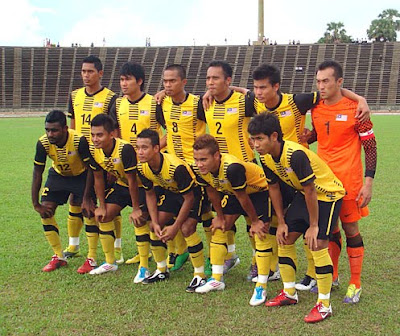 The Malaysian Olympic team, is also their U-23 team 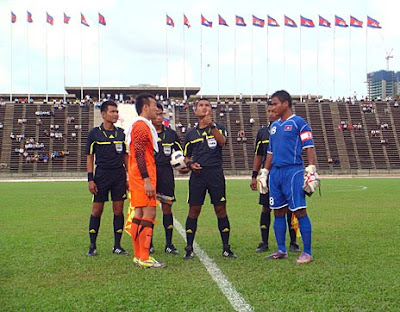 The two goalkeepers and match referee Thong Chankethya at the toss up. Ouk Mic is in blue.
Posted by Andy Brouwer at 8:00 PM