Bottom of the pile 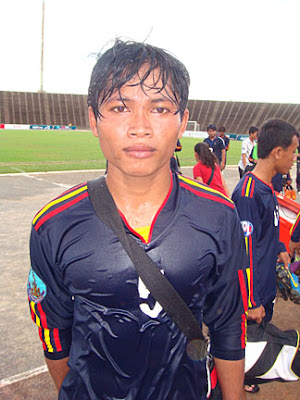 Rithysen's Tam Yousos popped up with the equalizer for his team this afternoon
Today's Metfone C-League games featured the four teams in the bottom five places in the table. I was hoping for at least a few goals to write home about but we were only served up half a dozen and the matches were pretty turgid affairs. The two bottom clubs with just a point apiece before today, doubled their tally with a 1-1 draw to remain rooted to the bottom places. Prek Pra gave their noisy supporters something to cheer on 17 minutes when Sos Souhana, a recent addition to the national team squad, used his quick feet to poke a shot inside the far post before the keeper could scramble across, to open the scoring. They just about edged it and were putting on more pressure in the 2nd half but with Mat Hasan and Sen Soukey messing up a couple of guilt-edged opportunities, it was Rithysen who stole the equalizer. Seth Kamel had the presence of mind to set up full-back Tam Yousos as he arrived late in the box, and he finished with some aplomb with eight minutes to go. There was still time for Rithysen's Keo Dara and Preak Pra's Philip Ali to waste more glorious openings and set the seal on a 1-1 draw that never really ignited. It was Rithysen's second draw of the campaign and with their recent foreign additions to the team, including the busy Dennis Nwaizu in midfield, they look stronger than they did at the start of the season. 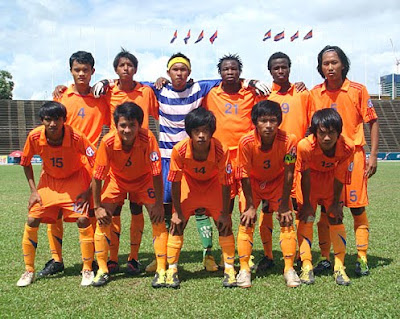 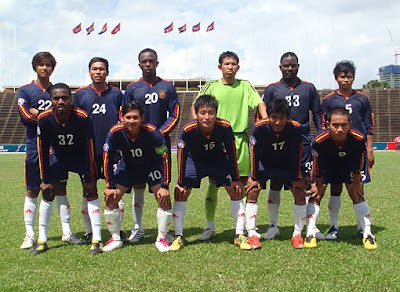 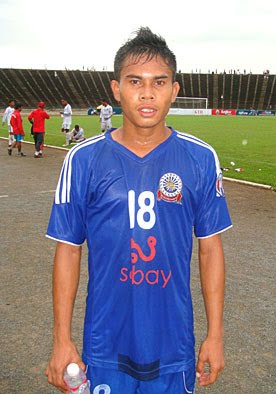 Sim Vutha of National Police scored their 3rd goal in a 3-1 win
The first half of the National Police versus Chhlam Samuth was so poor that the game should've been declared null and void on the pools coupon. Absolutely nothing happened apart from the kick-off and the referee's whistle to bring the half to an end. Dull as dishwater. The 2nd period brightened up when the Police scored against the run of play. On 69 minutes, Long Nasy took on two defenders in the box and got his shot away as he was falling, happy to see it nestle in the far corner when he picked himself up. A couple of minutes later the same player tore past keeper Sam Chamoeun but his goal-bound shot was hacked clear. On 74 minutes, Nasy was booked for simulation as he was blocked in the Sea Sharks' box, a decision that referee Thong Chankethya likes to give as often as he can. I can understand the need go cut out the diving crap that we see all too often but Nasy was blocked by a bodycheck and fell over. It was not simulation. If the referee had ever played the game, he would know that. Police then went further ahead, four minutes later, when Sim Vutha unselfishly laid it on a plate for Moeung Phanith to poke home. A minute later, Chhlam Samuth were back in it when Meas Sophana netted at the far post through a crowd of bodies but Police made sure of the victory when Nasy set up Sim Vutha for a simple finish on 84 minutes and a 3-1 win for the long arm of the law. 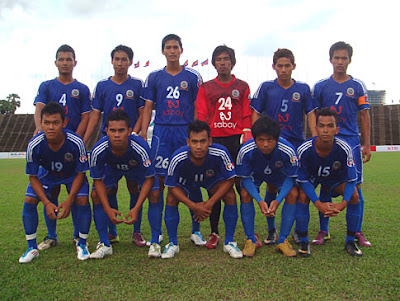 The National Police line-up who went onto win 3-1 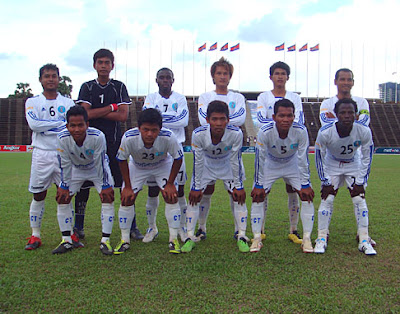 Chhlam Samuth looked good for a point until Police stepped on the gas on the 2nd half
Posted by Andy Brouwer at 10:42 PM