Bojan off to China 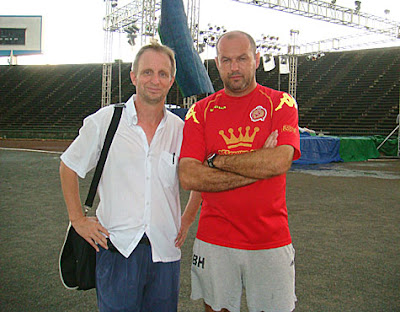 Sniff, sniff...one for the scrapbook. Bojan (in red) is off to China.
The worst news possible has happened. Well, for Phnom Penh Crown anyway. Not for Bojan Hodak, their head coach, who this morning is flying to China to become the assistant coach at the Chinese Super League champions, Shandong Luneng FC. It's a fabulous move for him, Shandong are one of the very best clubs in Asia and he'll be working with his former Croatian coach at NK Hrvatski Dragovaljac, Rajko Magic, so they know each other very well already. Bojan took over at Crown in November and in the 14 matches under his control, Crown won ten, drew two and lost two. He's been great to work with and made himself available at the drop of a hat to me and everyone else, his rapport with the players was excellent, so much so that some of them cried when he informed them of his decision yesterday. He had a story for every occasion and I'm sure his new adventures in China will bring him many more. I certainly hope our paths will cross again in the future.
I had a chat with him last night and this is what he had to say. "I have to think of my future and the money is a big factor as well. Shandong are one of the biggest clubs in the region, every year they play in the AFC Champions League and from there I can go to any Asian club in the future. From Cambodia it's not so easy as Cambodian football is not yet recognised enough. I'll be linking up with Rajko Magic, who was my coach in Croatia some 15 years ago. He's also a lecturer at the Croatian coaching academy so I know him very well. He asked me to join him as he's been following my work over the last few years." Bojan informed the Crown squad yesterday morning. "The players were surprised and there were some tears, though I won't mention any names," he said with his usual dry smile. Looking back over the past 7 months since he joined Crown, he had this to say. "The beginning was hard as there were many things to change, which we needed to do properly. Then we had the Hun Sen Cup and those bloody penalties. It was the wrong match at the wrong time, especially as we'd already played BBU four times in friendlies without a problem. It was just one of those days. Also my national team players were not right. They came back from national team duty completely unfit, tired and playing poorly. Now, the players are much more disciplined, professional and responsible than when I arrived. We saw that in the recent President's Cup matches. Both on and off the pitch they have improved a lot and that is something I'm very pleased with."
As for this morning, Bojan will fly out to Jinan, the capital of Shandong province on the east coast of China (home to 6 million people and the Great Wall of China), with his wife and son to begin their new adventures. For Crown, the immediate task is to regroup ahead of Saturday's important C-League game against the Army and the Academy head coach Bouy Dary will take charge of team affairs in a caretaker capacity until a decision is made on Bojan's permanent replacement.

If he drops by, do tell him Haresh Deol from Malaysia said hello.

All the best Bojan.

So sad.... I hope Crown will has new coach shortly and he will be doing as well as Bojan, DARA