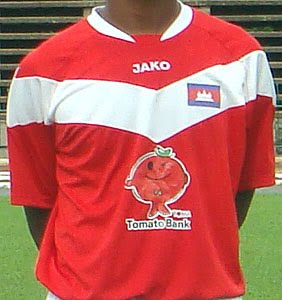 The new Cambodian football jersey
The Cambodian national team took to their friendly match with Malaysia on Tuesday wearing a brand new playing strip, courtesy of the sportswear company Jako. The German-based company is the official kit supplier to a number of football teams in Europe as well as the national teams of Luxembourg, Georgia and Moldova. The new strip is a very unusual design for the Cambodian national team which in the past has followed a more conservative design. The shirt sponsors are the Phnom Penh-based Tomato Specialized Bank, who have a joint venture with the Tomato Savings Bank of Korea, and provide a logo of a smiling, winking tomato. The suggestion that the likeness is of someone very close to the national team is of course pure speculation.

A couple of other items of interest. The football federation of Cambodia are looking for a nickname for the national football team. Word is that they used to be called The Royals, but no-one knew that, so now they're looking for something more memorable. I'm sure suggestions will be forthcoming by the bucketload if they fail to beat Laos in the double-header World Cup qualifying matches coming up. Neighbours Vietnam are apparently called The Red Warriors, whilst Thailand, who have just lost coach Bryan Robson (reports that he's got his eye on the Phnom Penh Crown job are unfounded), are called The War Elephants. The Philippines are sometimes known, unflatteringly, as The Street Dogs. My take on it, forget the gimmicks, call yourselves Cambodia and be done with it. Also up for discussion is the possible formation of a second league to sit under the Metfone C-League and under the jurisdiction of the FFC. They've been trying to get this kicked-off for a while now and wrote to all the clubs at the end of last year asking for money and applications for what was going to be a reserve league. That fell by the wayside and now they're looking for any clubs but will impose limits such as all players must be under-21, no foreigners and players must not be on the books of any C-League team. They're offering promotion to the C-League as the bait but the restrictions will fall flat on their arse if a current C-League club gets relegated. I don't think they've thought it through to its logical conclusion. No surprise there then.
Posted by Andy Brouwer at 3:58 AM