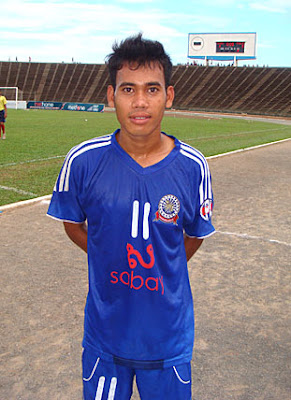 Tith Dina, scorer of 2 goals in National Police's 3-2 success
The first match in Sunday's Metfone C-League program was an entertaining five-goal affair that saw National Police take a two-goal lead, get pegged back by Kirivong before a late, late winner. Sophal Udom gave the Police a 15th minute lead in some style, cutting in from the left flank, body-swerving his way past a couple of defenders and burying his strike inside the near post. Not a bad way to kick-start the match into life. Kirivong striker Nelsom Oladiji can be a frustrating so and so if you are a Kirivong fan. He missed a hat-trick of chance's midway through the 1st half and at the start of the 2nd and Police made their opponents pay when Tith Dina sent a header in slow motion into the far corner five minutes before the break. At 2-0 down, Kirivong sensed a recovery when In Vichheka went looking for a penalty and duly got it when Sos Nasiet tapped his ankles. Even Oladiji couldn't miss from the penalty spot on 58 minutes. Oladiji then turned provider for the Kirivong equaliser on 74 minutes, when his deft touch gave Heng Koem Houng the easiest of tap-ins. Both teams missed opportunities at the death, Dina rolling his shot against the foot of the upright and Kirivong's Oladiji swinging his foot and missing completely when in space on the six yard box. As the referee put the whistle to his mouth, Police grabbed a dramatic injury-time winner as Tith Dina took advantage of a cock-up by Meak Chhordaravuth in trying to clear his lines and stroked the ball home from close range. It was rough justice on Kirivong after their fightback and Nelson Oladiji will be in for extra shooting practice as the teams now take a three week mid-season break. 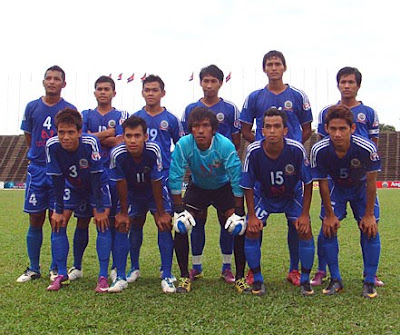 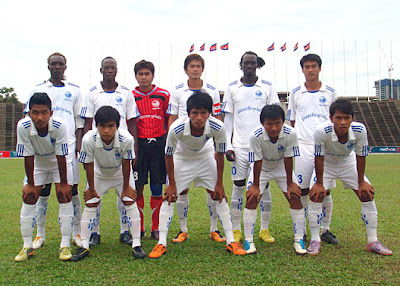 Kirivong will be licking their wounds during the mid-season break. They lie in 7th place.
Posted by Andy Brouwer at 10:05 PM