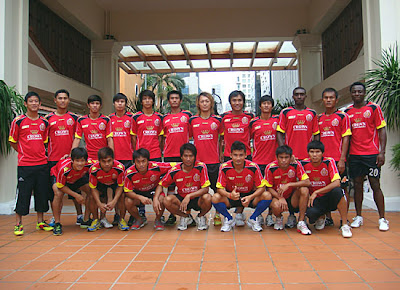 After this morning's light exercises, a team photo, naturally
Today is the big day. At 7.30pm tonight Phnom Penh Crown will take to the field against one of Singapore's strongest clubs. Between 2006-2009 the Singapore Armed Forces team carried all before them with 4 consecutive S-League championship titles. Last year they wavered a little and finished 4th but are again challenging for honours this season. Tonight they meet the best team in Cambodia. A 2-legged quarter-final tie against Albirex Niigata awaits the winners. Tonight's match is a one-off, winner takes all encounter. The Crown team arrived in Singapore yesterday afternoon. After last night's training session on the SAFFC pitch, the players had a light warming up session this morning at 8am, in front of their hotel. A few stretches and a jog just to get themselves ready for tonight's exertions. The team have free time now until a pre-lunch team meeting to discuss tactics. After lunch, more rest until high-tea and then off to the ground a couple of hours before the game. Everyone is in very good spirits, they know how good the opposition are but they also know how well they can play when they're on top of their game as we saw in the recent President's Cup matches. That's the sort of standard they'll need to match to get anything from tonight's game. 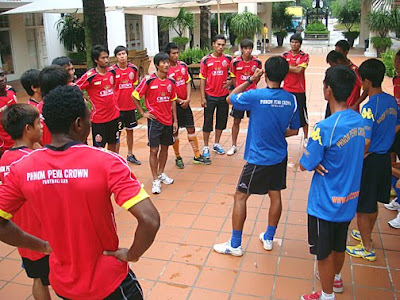 Coach Bouy Dary gives his team the low-down on the day's schedule
Posted by Andy Brouwer at 9:04 AM