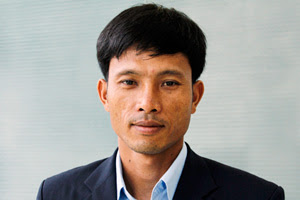 Bouy Dary, the man in temporary charge of Phnom Penh Crown (Pic: www.the-afc.com)
I paid a visit to the Phnom Penh Crown office this morning for a chat with caretaker coach Bouy Dary before he takes training with the first-team this afternoon. Dary is already in charge of the club's residential 22-strong Elite Academy and with the departure of Bojan Hodak, the club's head coach yesterday, responsibility for the first-team now also falls upon his relatively young shoulders. Dary is 27 years old. The former Cambodian national team player, who gave up playing in order to concentrate on coaching a few of years ago and who previously assisted national team coaches Scott O'Donell and Prak Sovannara, is not looking to take on the job full-time he assured me. He's more than happy coaching and shaping the future development of the club's youth program for the time being, but also understands the need to take over the reins of the first-team until the club appoint a replacement head coach. That replacement is likely to be a foreign coach, though it's much too early to be able to say who and where the replacement will come from. All in good time. The departure of Hodak to the best club in China, came unexpectedly so Crown will take time to ensure the next appointment is in keeping with their master-plan to push Cambodian club football to a new level of professionalism in a structured way that will be a blueprint for other clubs to follow. Dary confided that he doesn't intend to make any sweeping changes to the playing staff. He believes he has the best homegrown players in the league at his disposal and that the direction they have taken under Hodak was the right direction, and in the right way. Effectively, it will be business as usual. The first challenge will be the C-League game against the Army at Olympic Stadium tomorrow afternoon with the caretaker coach having a fully fit and available squad to choose from.
If you think the job of the head coach is concentrated solely on the training field and on match-days, then think again. Dary was at the office to supervise the paperwork for the forthcoming first-team trip to Singapore for the RHB Singapore Cup, that included sticking portraits of each player onto competition entry forms, as well as organizing travel arrangements for half of his Academy boys who will also be travelling to Singapore in a couple of weeks time for a six-a-side tournament. The other half of the Academy will then head to Vietnam for a series of matches too. There was also the little matter of arranging some friendly matches next week to give a run-out to some of the players who haven't played in recent weeks. These were just a few items on a long list he was working through before thinking about this afternoon's training session with the first-team squad. We also discussed the possibility of staging the AFC President's Cup finals here in Cambodia. Not such a daunting prospect now after the successful staging of the qualifying group round last week. But that's another story altogether. For the moment, Dary is concentrating on the first-team and their match against the Army tomorrow, and of course his Academy boys, who I know think the world of their coach. 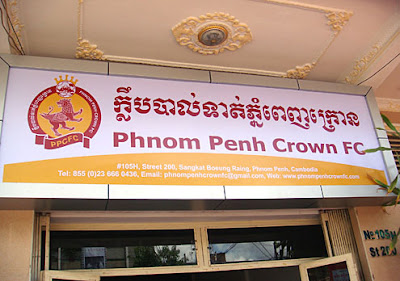 A new sign adorns the club office on St 200, where you can buy your Crown souvenirs including shirts, scarves and pennants from the office manager Chhi 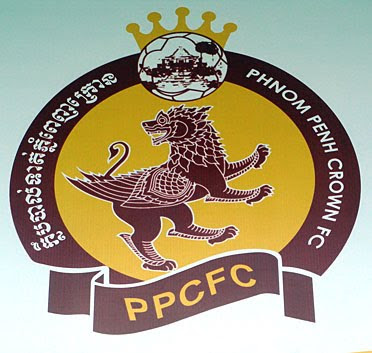 The PPCFC logo adorns the new sign at the club office on Street 200
Posted by Andy Brouwer at 2:26 PM