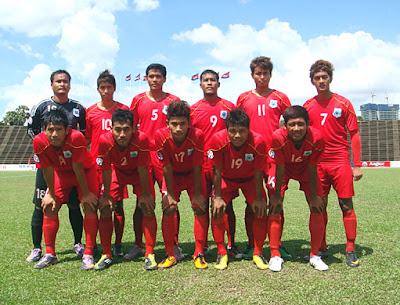 Preah Khan Reach rode their luck to beat BBU 2-1
Okay let's play catch-up on the Metfone C-League results this weekend. The main one to concern yourself with was Phnom Penh Crown's 1-0 victory over the National Defense Ministry (the Army to you and me). Kouch Sokumpheak got the breakthrough goal eight minutes from time. The goal and the 3 points put Crown back on top of the pile, ahead of Naga by 1 point. There was a heap of moaning and groaning by the Army bench at the final whistle but I still don't know what they were complaining about. They rarely ventured past the half-way line in the 2nd half and so whilst it took its time in coming, the winner was fully justified. In Saturday's other game, Preah Khan Reach stole it at the death when the smallest player on the park, sub Chea Samnang was left unmarked at a corner to steer his header past Hem Simay. There was just three minutes to go. BBU were gutted, whilst PKR were happy with their good fortune. PKR began the game brightly enough but faded. Khuon Laboravy was in the thick of it as usual but he seemed as though he had his mind on other things and wasn't at his sharpest. Twice he fluffed easy opportunities from close in that he would normally gobble up for breakfast. However, he did set up PKR's opening goal on 14 minutes when Tum Saray slid him in and Laboravy's fizz across the face of goal was turned into his own net by Nhim Sovannara under pressure from Sam El Nasa. BBU stayed in the hunt and equalized a minute before the break. Cheav Sopheak's floated free-kick to the far post was headed back across by Pech Sina and the ball dropped over Ouk Mic and into the far corner for 1-1. There wasn't much between the two teams in the 2nd period though PKR's Suon Veasna was a mite unlucky to have a goal ruled out for accidental handball just before he stroked it home. Then Chea Samnang popped up with his matchwinning header from close range just three minutes from the end for PKR to grab a 2-1 win. they moved up to 4th spot with BBU languishing in 7th. Both teams are still a shadow of the sides that did so well in the pre-season Hun Sen Cup. Another possible reason for their failure to test the top teams is their lack of foreign talent in their line-ups, having chosen to go for Khmer players only this season. 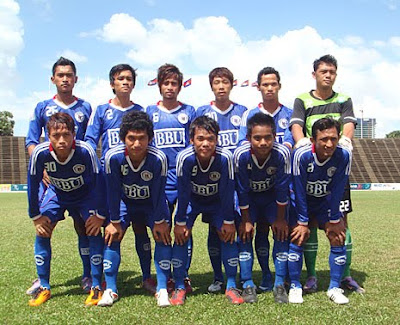 BBU will be gutted to lose against PKR 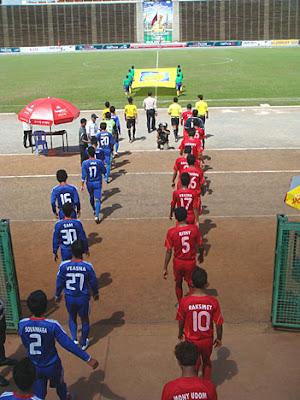 The two teams take to the field on Saturday
Posted by Andy Brouwer at 10:17 PM