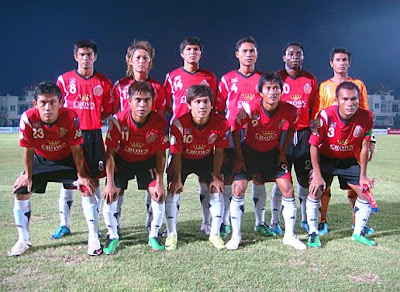 The PPCFC starting line-up: Back Row LtoR: Narith, Ota, Sovannrithy, Tiny, Njoku, Bunchhay. Front Row: Sopanha, Virak, Sokumpheak, Chaya, Sothearith
Hands up. When you are beaten by a better team you have to admit it and tonight, Phnom Penh Crown were on the receiving end of such a result in their 4-0 defeat by the Singapore Armed Forces (SAFFC) in their first round Singapore Cup encounter. The home team, in front of a crowd of 1,312, produced an efficient hatchet job on the upstarts from Cambodia, scoring at crucial times and batting Crown into submission with neat incisive passing and clinical finishing. Crown had their opportunities but SAFFC had more and another good showing from Crown keeper Penh Bunchhay kept the scoreline down. On his debut, Takahito Ota was the pick of the outfield players for Crown, on a night where the team didn't do themselves justice. Caretaker coach Bouy Dary echoed that in his post match comments. "We lost concentration and we didn’t perform as I know we can. SAFFC are a good team but we allowed them to be, we made it look too easy for them. Fitness was a telling point and we looked tired after our glut of games recently. Now we have to start again for our important game on Monday against Naga.” The Warriors, as SAFFC are known, put out an experienced starting eleven with seven players over thirty years of age. The oldest players in the Crown team were two twenty-six year olds. On this occasion, experience won out.

The crowd included a good sized contingent from Cambodia, but it was the 8-times Singapore champions who stamped their authority on the game after a fairly even opening period. Though Crown keeper Peng Bunchhay was called upon to keep out Ivan Jerkovic’s low drive early on, it was Kouch Sokumpheak and Kingsley Njoku that very nearly unlocked the Warriors defence. Sokumpheak’s turn and low shot was held by SAFFC skipper and keeper Shahril Jantan, whilst Njoku’s diving header at the far post from San Narith’s searching cross, missed the target by a few inches. Quick feet in the penalty area by SAFFC’s Croatian striker Mislav Karoglan unnerved the Crown defence and moments later, they failed to cut out Shaiful Esah’s low center and man-of-the-match Erwan Gunawan picked his spot from the edge of the box. Eighteen minutes on the clock and the home side had their noses in front. With their next attack, they made it two. Gunawan sent over an inch perfect cross from the right flank and Indra Sahdan was equally precise with his header into the far corner on 21 minutes. Three minutes later and a neat interchange between Chan Chaya and Sokumpheak presented the latter with a glorious opportunity as he raced to the edge of the box, but his shot on the run missed the cross-bar by five yards. As the half wore on, the home team began to dominate possession and Peng Bunchhay was called upon to dive bravely at the feet of Syaiful Iskandar and then collect a low drive from Sahdan. Two attempts by Kingsley Njoku offered some resistance, the first was a looping shot after he barged his way onto a drop-kick from Bunchhay, and then moments later his powerful drive was pushed aside by keeper Jantan. As the clock ticked down for the half-time break, SAFFC were awarded a penalty by referee Abdul Malik, when Tieng Tiny was adjudged to have swiped away the feet of Mislav Karoglan. The striker put the ball on the penalty spot and quickly punted it into the net. The referee ordered a retake as he’d not blown his whistle and the second spot-kick was expertly pushed aside by Bunchhay, diving to his left. From the resultant corner, Erwan Gunawan ghosted in unmarked to head home Esah’s well-flighted center. It was a killer blow for Crown coming in the second minute of time added on and immediately after the penalty save. Heads down, the Crown players trudged back to the dressing room.

SAFFC's slick passing and neat interchanges on the edge of the Crown box were causing all sorts of problems though Bunchhay was out quickly to smother Sahdan and then acrobatically grab a lobbed shot by Raza Khalik. Substitute Fazrul Nawaz made an impression just seven minutes after his arrival on the field. He was in acres of space to tuck the ball home for goal number 4 on 67 minutes after Khalik's low cross on the run. It was all over for Crown bar the shouting. Three minutes later Kingsley Njoku took Sun Sopanha's long ball in his stride, only to see his goal-bound effort cleared off the line by Daniel Bennett to put an end to Crown's resistance. There was still time for Nawaz to miss from close range with Bunchhay breathing down his neck, as SAFFC finished the match as worthy winners. Winning coach Richard Bok commented after the game. "Going 3 goals up on the stroke of half-time really helped us. Crown gave us a good fight, certainly for the first twenty minutes, but with our two weeks' break we looked fresh and composed on the ball throughout the game."
PPCFC line-up: Bunchhay, Narith, Sovannrithy (Dara 40), Tiny, Sothearith, Sopanha (Narong 78), Ota, Chaya, Virak (Ratana 84), Sokumpheak, Njoku. Subs not used: Visokra, Dara, Nwafor, Ratana, Narong, S Pheng, H Pheng. 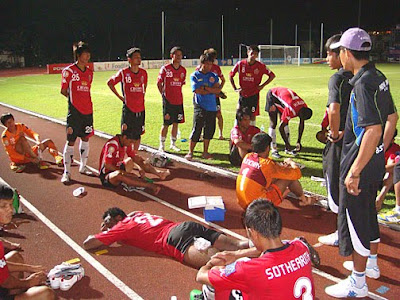 A dejected Crown camp immediately after the final whistle 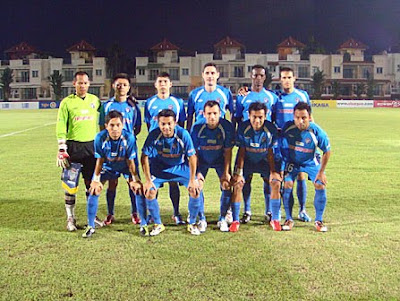 The SAFFC starting line-up pose for the camera 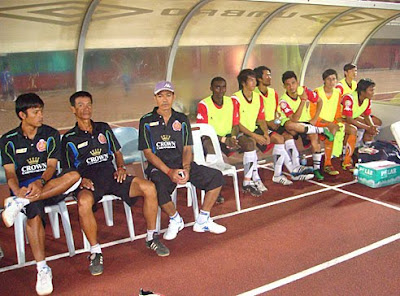 The Crown bench moments before the kick-off tonight 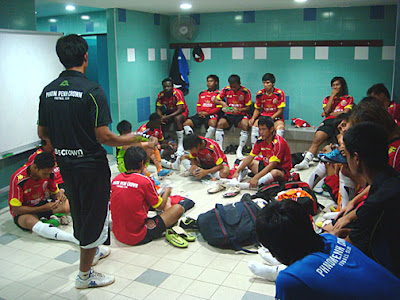 Inside the Crown dressing room as coach Bouy Dary issues final instructions to his players
Posted by Andy Brouwer at 11:50 PM

That could happen in football. We just keep looking forward to improve for future.
But what I have question in mind is that why Dary opted to play only three defenders (Tiny, Thearith and Sovanrithy) as he knewy he faced a good team.

Hi Sophak,
the back four for Crown last night was Sothearith and Tiny in the middle with San Narith at right-back and Sun Sovannrithy at left-back. Sovannrithy was replaced before half-time by Chan Dara. We played a 4-4-2 formation.
Andy