Crown back on top spot 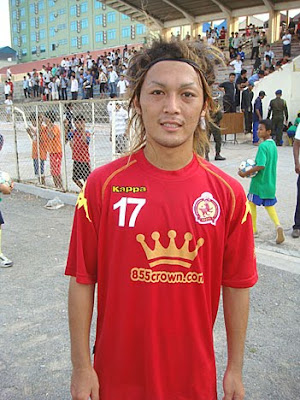 Takahito Ota scored his 1st goal for Crown v Police in their 2-0 victory today
Phew!...Phnom Penh Crown did exactly what I hoped they would this afternoon. They showed glimpses of good form, kept their composure and jumped back to the top of the Metfone C-League with a 2-0 victory over the National Police, no thanks to a referee who was abysmal and a self-destructing Police team. Takahito Ota registered his first goal for Crown in the 7th minute to settle the nerves and Chan Chaya added a second on 70 minutes to give Crown the 3 points to take them back above Naga and into 1st place in time for the mid-season break. The Police did themselves no favours when they lost full-back Ieng Tin for a rash 2nd yellow card on 36 minutes and then their skipper, Sophal Udom showed once again why he is a danger to the opposition, but for all the wrong reasons. With ten minutes to go he barged into Odion Obadin and as the Crown defender was lying on the ground, Udom aimed a kick at his face but caught him in the chest, sparking a melee, with Udom, fists up, looking for a fight. The referee flashed the red card and Udom was shoved away, though the military police had by this time surrounded the Crown bench in a bizarre turn of events. Why they didn't escort Udom to a police cell awaiting a charge of battery or common assault is beyond me. It was Udom who was banned for six months a year ago after he attacked a referee from behind. The boy needs some serious treatment to work out his anger management. Crown had done enough, it wasn't a vintage performance by any means but in the circumstances it was enough and a job well done. More details from the match later.
Posted by Andy Brouwer at 5:56 PM

maybe the MP surrounds the Crown bench so not to let the situation get bigger if the Crown players decide to jump in on the fight to help their victim teammate?

From a fan of a Thai Regional League team, it's great to see your passion and knowledge for Cambodian football and Phnom Penh Crown FC. Bookmarked!

Anon - the MPs headed towards the Crown bench because they were looking for trouble. Its very common for the MPs to run onto the pitch whenever there's an altercation on the pitch. However, this is not their job. Their job is to safeguard everything outside the playing area. The referee is in charge ON the pitch. But in Cambodia, the MPs are always looking to get involved.
And don't worry, it was only Police players looking for trouble on the pitch, our bench and our players were not involved. Even after Udom had kicked Obadin whilst he lay on the ground, a very cowardly act in itself, he then wanted to continue fighting with anyone. He lost his head completely. The MPs paid him NO attention whatsoever, too busy surrounding the Crown bench!! they got their priorities wrong.