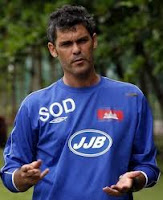 Managing the national team of Cambodia presents a unique set of challenges. For enthusiasts of the game interested in knowing about the challenges and explore about football in the small South East Asian nation of Cambodia, there is no better man to talk than Scott O’Donnell. A former footballer for Australia, O’Donnell was at the helm of the Cambodia national team for a twin span that lasted 4 years. When Sportskeeda’s Renato caught up with the former Cambodia manager, O’Donnell spoke about his past as a footballer, mainly in Singapore where he played in the first edition of the Professional Football League, and matters in Cambodia.

How do you analyse your experience in Cambodia?

It was rewarding and frustrating at the same time. I enjoyed working with the players and my coaching staff, but after the President Ravy Khek left Cambodian Football Federation (CFF), it was increasingly difficult to get the support from CFF. With very little development taking place it was always going to difficult for any coach to achieve any kind of success as the players are not taught the basics – tactical and technical aspects of the game – at a young age.

Do you rate the work of ex-President Ravy Khek as good at CFF? What are your impressions about Cambodian football directors?

Ravy has not been involved with CFF for a few years now. I have no further comment to make about CFF.

What is the atmosphere like in the Cambodian League? There are many Africans playing in Cambodia. Do you think it is positive for development of Cambodian football?

Football is by far the number one sport in Cambodia. There are many Africans playing in the local league, unfortunately the quality of these players is not great. I doubt most of them are Professional players as many are no better than the local players. So I don’t think the majority of the current crop of players are helping to develop the game in Cambodia. If the clubs were able to sign experienced, quality professional foreign players, then I think it would undoubtedly help the development of the game in Cambodia.

What are your memories from the first Singaporean Professional Football League editions in 1996 and ’97?

I played for four years in the S-League. The first year was amazing with the amount of publicity, press and TV coverage and good crowds. Those were very exciting times to be playing in Singapore. There were some very good foreign players and the atmosphere was great. Unfortunately that is no longer the case. The interest in local football has evaporated and I have to say that the quality of foreign players leaves a lot to be desired compared to 1996.

Singapore has vision and organization and Malaysia has big crowds and passion. Where did you enjoy working as player and coach the most?

Even now Malaysia is struggling with crowds. Only Selangor, Kelantan and Terengganu manage to get good crowds these days. I enjoyed playing in both Singapore and Malaysia. Both nations are very passionate about football. Obviously playing in front of big crowds in Malaysia was great from a player’s view point. I think it is very difficult at present in Singapore to compete with the likes of the EPL and UEFA Champions League. Most people prefer to watch those leagues instead of the local ones, but I think Football Association Singapore (FAS) are doing the best to try and turn things around. But for that to happen they need the support of the clubs as well.

You played in Singapore against two all-time goalscoring greats in the S-League: the Brazilian Egmar Gonçalves and the Croatian Mirko Grabovac. Which of them was the more difficult opponent?

They were both very different players, both very good. I marked some very good strikers in Australia and Malaysia too. Egmar was a very consistent player for so long for Home United FC. He was strong and had the knack of being in the right place at the right time to score so many goals. We enjoyed some good battles on the field but I think there was mutual respect between the two of us. Mirko Grabovac was a different player to Egmar. Probably technically more skillful than Egmar but not as physical or mobile, but still a very good striker.

We sincerely thank Scott O’Donnell for his valuable time and thoughts and wish him the very best of luck in his future endeavours.

The Asian travel website Travelfish, well known for dishing out useful advice has turned its attentions to football in Cambodia. Visit their website to find out more on watching football at the Olympic Stadium here.

The BIDC Cup, which aroused such passion when it was hosted at the Olympic Stadium in 2009 and won by the Cambodian U-23 team under the former coach Scott O'Donell, is heading back to Phnom Penh this coming October. Though the full details are not yet clear, six countries have been invited to participate with teams, to include Cambodia (with the Cambodia U-23s using it as a prelude to the SEA Games in November), Vietnam, Laos, Myanmar, China and Thailand.
Posted by Andy Brouwer at 7:04 PM