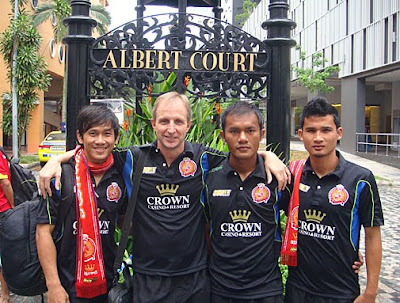 Moments before we left our Singapore hotel for the last time this morning: LtoR: Kouch Sokumpheak, me, Thul Sothearith, Phoung Narong.
Phnom Penh Crown arrived back in Phnom Penh at lunchtime today, after we left Singapore on Jetstar at 11.50am. Flight time was 1 hour 45 minutes. Last night the whole squad went to watch another of the Singapore Cup ties, this one involved two of the foreign teams, Pattaya from Thailand and Okkthar from Burma. Okkthar were staying at the same hotel as us and also included ex-Crown striker Jean Roger Lappe Lappe in their ranks, so that's who we cheered for. The Burmese team, roared on by a very large and vociferous following, squeezed home 2-1. In my opinion neither team could lace the boots of SAFFC - so it's just our misfortune that we drew one of the strongest teams possible in our 1st round game. C'est la vie. After a quick rest the squad were training again at 4pm in readiness for their big crunch match versus Naga on Monday at 3pm. I've just heard that the football federation, in their infinite wisdom (I'm being sarcastic) have decided to change the venue for this important match, as well as our final league game of the 1st half of the season, against the National Police in a week's time on 25 June. It's certainly late in the day to be making these decisions. Both matches will now be played at the Old Stadium, aka Army Stadium, on what can only be described as a pitch in a very sorry state. The Olympic Stadium surface leaves a lot to be desired at times, but playing top level matches at this alternative venue, on a pitch I've played on many times myself so I know its not good enough, is an embarrassment. I believe the excuse they've come up with is that they are preparing the Olympic pitch for the World Cup game v Laos on 29 June, yet they are allowing 4 matches this weekend and that ridiculous national team friendly against a Vietnamese touring team on Wednesday 23 June. Again, this smacks of Crown being penalized for representing the country in international club competitions, as they were when the FFC refused to shift the Kirivong game, rather than being supported by its own federation. 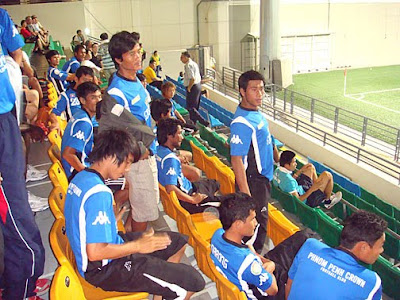 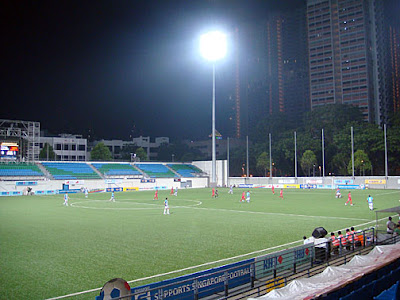 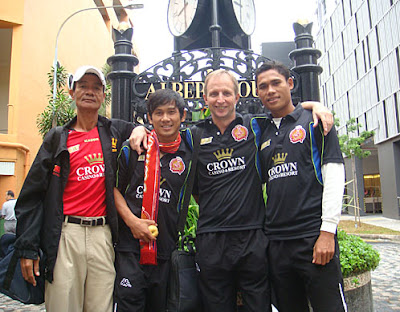 I finally succumbed to the extraordinary number of photos the players take of themselves. Here I am with (LtoR) goalkeeping coach Prak Vanny, Kouch Sokumpheak (with scarf to keep warm) and Tieng Tiny.
Posted by Andy Brouwer at 7:21 PM