Ali has Naga on the ropes 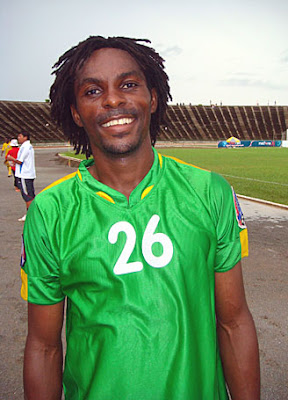 Prek Pra's inspirational 'play anywhere' Philip Ali
Football is a funny old game. Just ask Naga Corp's coach Prak Sovannara. His team have been pulverizing all before them in the Metfone C-League in recent weeks and would've expected to do the same to lowly Prek Pra Keila today, and to return to the top of the league table. They'd scored 25 goals in their last three matches and looked unstoppable. That is until they met Prek Pra. Unstoppable force meets unmoveable object this afternoon and the latter won. Prek Pra recorded the shock result of the season so far, winning 3-2. And they had utility player Philip Ali to thank the most. He was restored to the team's attack today and it worked a treat with the Nigerian grabbing two goals and acting as his team's inspirational figure. It was all Naga from the kick-off and Kop Isa and goal-machine Julius Oiboh went close before Ali moved onto a long ball out of defence, took it around Naga keeper Phorn Ratana and wrongfooted Om Thavrak on the goal-line to give Prek Pra a shock lead on 22 minutes. He'd caught Naga asleep. Isa called Yok Ary into action and when Teab Vathanak was felled by Vy Lika it looked like Naga would get a quick leveller. Incredulously, referee Thong Chankethya pulled out a yellow card to book Vathanak for simulation. Poor decision, but perhaps justice for the many occasions Vathanak does go down easily to win a penalty. Three minutes after the half hour and Naga made it 1-1. Vathanak raced away and his cross was whacked into his own net by Sos Hanafy to the dismay of his teammates. Two more Naga chances before the break saw Vy Lika's inadvertent touch palmed away by Ary and Isa miss badly when Ary closed him down.
Torrential rain at the interval gave the teams a slippery pitch to handle and Naga got their noses in front just three minutes after the restart. Meas Channa's chip found Kop Isa all alone and he sidefooted past Ary, with the Prek Pra backline awaiting a linesman's flag that never came. Naga replaced the injured Ratana in goal with Mak Theara but he was helpless when Vy Lika rose above everyone else to head home Prek Pra's equalizer on 64 minutes. With their tails up and sensing Naga were on the ropes, Philip Ali was on the spot when Hanafy's corner was misjudged by Thavrak and the ball slipped through to the tall Nigerian who made no mistake from three yards out. You'd have though Prek Pra had won the World Cup judging by the celebrations on and off the pitch. Now 3-2 ahead, they breathed a sigh of relief when Omogba Esoh turned the ball inches wide from in front of the goal and held on for a famous, and totally unexpected victory. Even with their two national team players, Mat Hasan and Sos Souhana having anonymous games, Prek Pra had recorded their first win of the season and toppled the mighty Naga and to everyone's surprise had kept Julius Oiboh off the goalscoring sheet, after his 12 goals in his last five matches. It will be party-time in Prek Pra tonight. 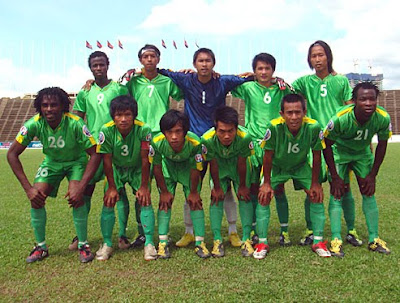 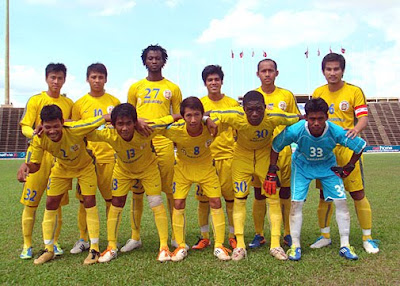 Naga will be stunned by their 3-2 defeat to lowly Prek Pra Keila this afternoon
Posted by Andy Brouwer at 10:13 PM

I'm not friend to big money spend team. I always look forward to see such a poor team from a small muslim village beat any big team and that will come true one day. What i'm waiting come true on Saturday 04 june 2011. This tell me something about the interaction between financial and sportive power that affect many part of young footballer in this new modern era.